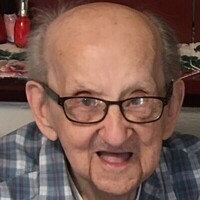 Chester Stephen Dubos, 89, of Elizabeth Township, passed away at home on Wednesday, June 2, 2021. He was born December 20, 1931 in Royal and was the son of the late John and Veronica (Hisnanick) Dubos. He was the husband of the late Marsha (Reder) Dubos who passed away December 25, 2017. Chester was a member of Saints Joachim and Anne Parish - St. Michael Church in Elizabeth Township. He was a machinist for the former US Steel Duquesne Works and retired after 36 years of service. Chester was a US Army Veteran of the Korean War. For his service he received the National Defense Service Medal, United Nations Service Medal, Meritorious Unit Citation, Good Conduct Medal, and the Korean Service Medal. He is survived by his sons, Denis (Kysanda Jean) Dubos of Brentwood, Ronald (Marilyn) Dubos of Waynesburg, and David Dubos of Jefferson hills, grandchildren, Justin, Michael, Devin and Alexa Dubos, brother, Stanley (Elizabeth) Dubos of Chestnut Ridge, nieces, nephews, his special caregiver, David North of Jefferson Hills, and his dog-friend, Oscar. He was preceded in death by 8 brothers and 2 sisters. Visitation and funeral service are private. The Rev. Thomas Wagner will officiate. Interment with Military Honors will be at Round Hill Cemetery, Elizabeth Township. Arrangements are by Gilbert Funeral Home and Crematory, Inc., 6028 Smithfield Street, Boston, Elizabeth Township. (412) 751-5000 Drew J. Gilbert, director. Condolences may be made at Gilbertfuneralhomeandcrematory.com